Our granting programs over the years has connected Inspirit with a diverse range of change leaders from across Canada. From civic engagement to storytelling, these organizers, educators, artists, environmentalists and activists bold push against the boundaries of inclusion.

Diasporic storyteller, photographer and Afrofuturist artist Riya Jama is one such change leader. Using original photography and sourced images, Jama conjures elaborate alternate worlds where Black women and girls star in extraordinary narratives complete with intricate back stories of how they came to be. Jama first fell in love with the genres of fantasy and science fiction as a child, but was disappointed the dismal representation of Black people in the stories she read. That was when she decided to write the kind of stories she wanted to read, with characters she needed to see as a young Black girl. She tried to satisfy her own insatiable curiosity and answer the old question of “What if?” What if there were Black centaurs? What if there were Black girls traversing the universe looking for a new home planet? What if we get to find out what djinns feel about being demonized? These imaginary worlds are her escape from the harsh realities of being Black and Muslim in Canada, as well as a visual love letter to Black girls who share her hunger to be seen.

We got to chat with Riya about why her vision is fixed on the future and what drives her to keep creating fantastical characters. 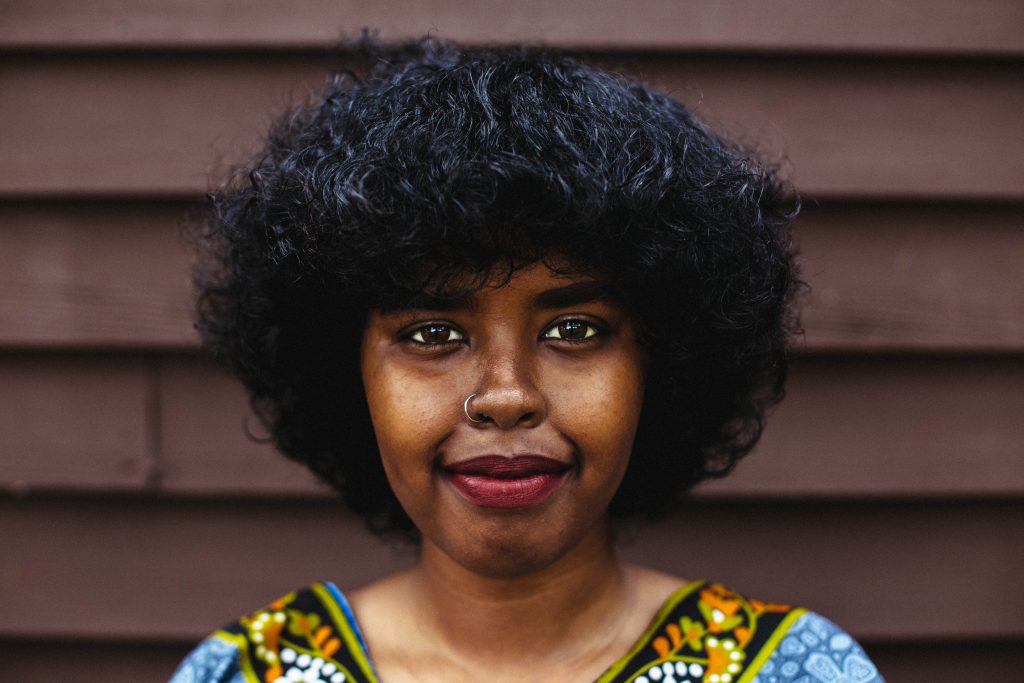 Question: Why do you emphasize on looking to the future in your art?
Riya: I used to never have an answer to this question until I listened to an NPR podcast on Afrofuturism with Ingrid LaFleur. She’s a candidate running to be the mayor of Detroit and her campaign was all about Afrofuturism. Something she said in the episode that was so fascinating to me was, “Of course we’re dreaming of the future. Do you see our reality?” I actually never thought about that way. My reality is so painful as a Black woman of the Muslim faith where I don’t know where I belong. Where I do belong is so heavy with oppression and limitation that I have to dream of a new reality. I’m in desperate need of seeing Black girls in space because being on earth is painful. To be Black and to be a woman and to be Muslim is to know that, at any given moment, you could be victimized by a hate crime and not know of its gender-based, race-based or if it’s Islamophobia. It could also be all three at the same time because I don’t have the luxury of shedding [any part of my] identity.

Q: How does Afrofuturist art help you navigate the challenges of being Black in Canada?
R: I need whoever is listening to me to recognize that I’m painting my future black. This is the Black experience. My future is going to be black because this is who I am and the fact of my identity. I need to look into the future. I need the hope because hope is the most powerful tool, right? I need the hope to know there is a future for me. A future where I can thrive, a future where I can feel safe. And if that future looks like some fantastical element, then hell yeah, give me that future. Give me the future with me chilling on the moon with a freaking beast or something. Give me a future where there are these guardians of these planets. Give me a future where I know I exist and I can be celebrated and I can be affirmed because I am in it. 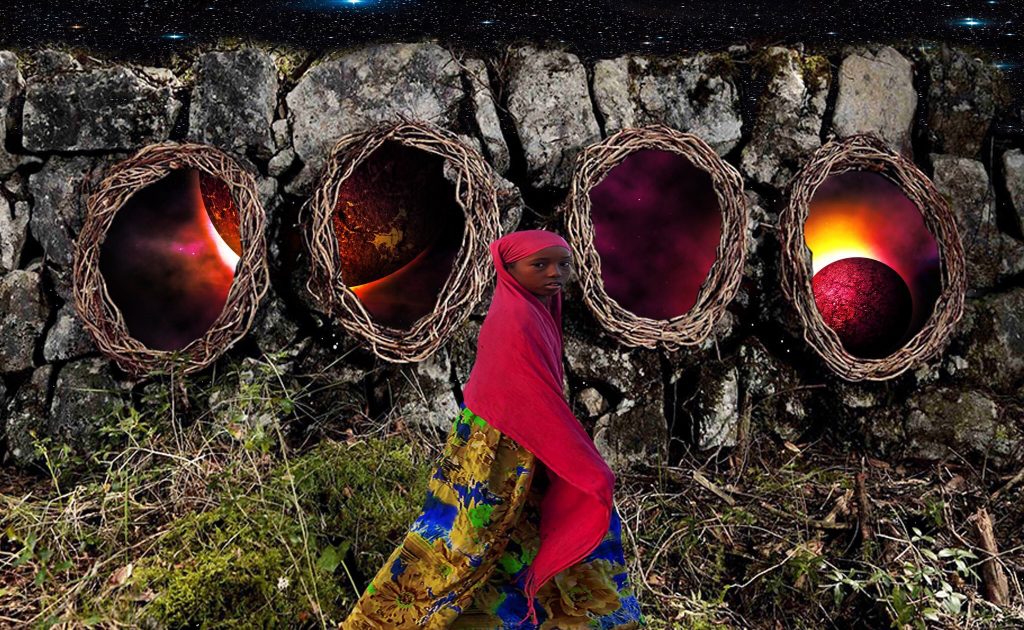 Q: How does science fiction influence your imagination as a child and later as an artist?
R: I speed-learned how to speak English. Speaking it was a lot easier than reading it. But once I was able to read little stories and write my own stories, I just fell in love [with science fiction]. A big theme in my life is escapism. I’m always escaping the moment. For example my adolescence had a lot of bullying, a lot of isolation, a lot of loneliness. Nobody wanted to be my friends and all I had were my books. My books were my friends. My books gave me a beautiful exquisite type of escape. It gave me relief from painful moments of bullying. There are moments as an adult where I can’t communicate with my friends what I want to tell them so I use art to explain myself. I write them poetry and I write them short stories—I find other ways to communicate. 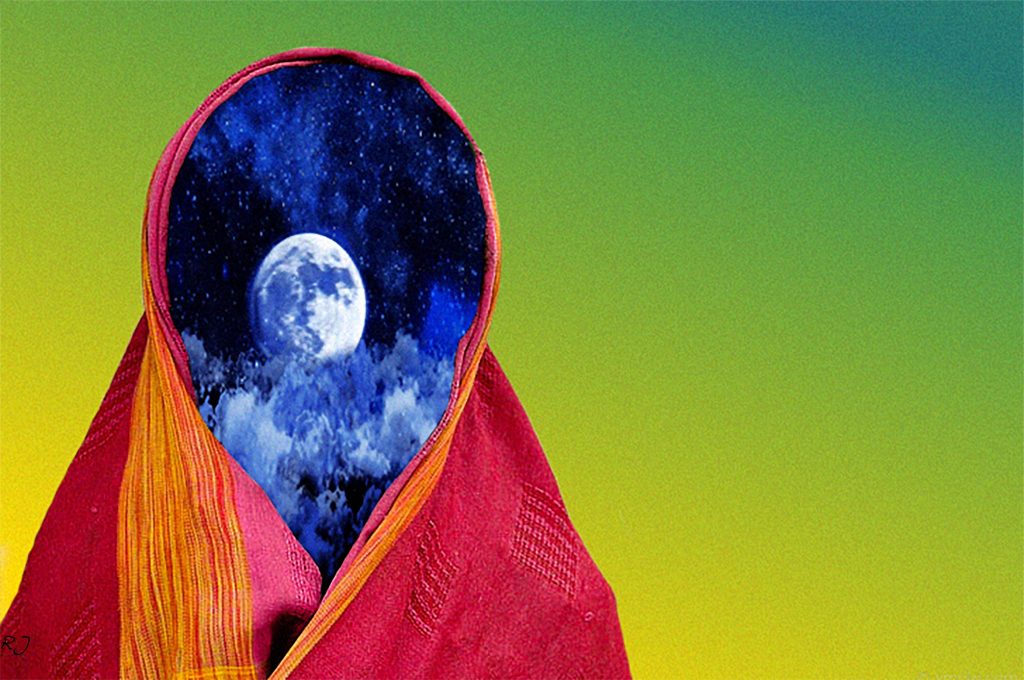 Q: You’ve created many characters with super-natural powers and fantastical back stories. What inspired them?
R: I know where my love for the supernatural came from. It came from being scared in Islamic classes and being told about all the jinns and satans. What if the satans are just sad people—can we talk about that? When I first came to Canada, Etobicoke, which has a heavy population of people of colour [today], was not so rich in diversity. It was very white. So when I realized that I was being demonized and [bullied], I became empathetic whenever I heard stories of the underdog. So whenever I was told about jinns or ghosts or demons or satans, I was super empathetic [laughs]. Maybe they’re misunderstood like me, too. Maybe they need their story to be told. So every story I’ve ever written came from a place of what if. What if I made a black angel? What if I made a black centaur, which is half horse half human? What if I made a black fairy? Everything starts with “what if”. So I used to write short stories about what if satans have thoughts? Let’s hear their thoughts because I would like to hear what they feel about being demonized.

Q: You mentioned that your art is driven by the lack of Black representation. Can you elaborate on that?
R:When I was growing up I hardly saw anyone who looked like me [in sci-fi] and I internalized it. My main characters didn’t look like me and my art didn’t look like me because I thought nothing that looked like me mattered and anyone who looked like me were not valid. There’s a generation of babies right now who are growing up with Black Panther who in Halloween 2018 got to dress up like Black Panther. They got to wear this costume with pride because everybody knows who Black Panther is. I can’t wait to be represented—I was dying of starvation to be seen and to be heard—and because I cannot wait, it’s important for me to represent myself. My most favourite message I’ve received is: “I feel seen every time you post new art that features a Black girl in some fantastical scene.” I am creating Black art but I’m particularly creating in alternative genres like fantasy and sci-fi; in areas where Black people are not allowed to exist but white people always exist. So I centre Black people in my art and I can focus only on Black people. Before [my art] used to include non-white people or all people of colour. But now I’m focusing only on Black people because I need a young Black girl who’s into the weird genres, who’s into outer space, who’s into sci-fi, who’s into these genres where she doesn’t see herself—I need her to know that there is at least one artist here who’s making sure to represent her. My art is the representation that I was dying for as a kid. Representation is an affirmation.

Q: Why do you centre Black people in your stories and imaginary worlds?
R: It’s important because when you don’t see yourself reflected and represented, you start internalizing that and you start feeling like maybe you shouldn’t be seen. Maybe you’re unworthy to be seen. Maybe you don’t matter. For a writer like me when I was growing up, my main characters were people who didn’t look like me because I thought these were stories that people wanted to read. They didn’t want to read stories about people who were like me with Black experience from the Black diaspora. They wanted people who were my opposite; they wanted a white girl. Honestly, I wrote a lot of stories that the main character was a blond blue-eyed girl because that’s what I read. That’s what I thought was valid and I thought I didn’t matter. And when you don’t see yourself reflected, the internalization is really painful. Anytime I go to a panel and Q&A where I’m being asked questions about my art, the [most] aggravating question that I get asked is why do I centre Black people in my art? Particularly in my afro-Futurism; why afro-Futurism instead of just futurism? The simplest way I can answer that is to say that it’s necessary. I need this. At my first solo exhibit in July of last year, when anyone asked me I kept telling them my exhibit is a love letter to Black girls. It’s a visual love letter to Black girls.

Q: Why is Black History Month still relevant today?
R: Black History Month is still relevant because it’s a month of affirmation, especially within the Black experience. We contributed so much to so many things but we’re constantly being removed from the narrative; there’s never a moment when a Black person is being celebrated the way we need them to be. It’s important because it’s necessary for a group of marginalized people who I share an identity with, who are constantly being erased from stories. Even with identity—I’m not just Black, I’m also Muslim. In the Muslim community, I’m never seen. In the Black community, as a Muslim, I’m never seen. So where do I exist? Black History Month matters to me because this is the month where I get to see Muhammad Ali, where I get to see Malcolm X being celebrated in a way that my black Muslim existence never gets to be. It’s affirming. 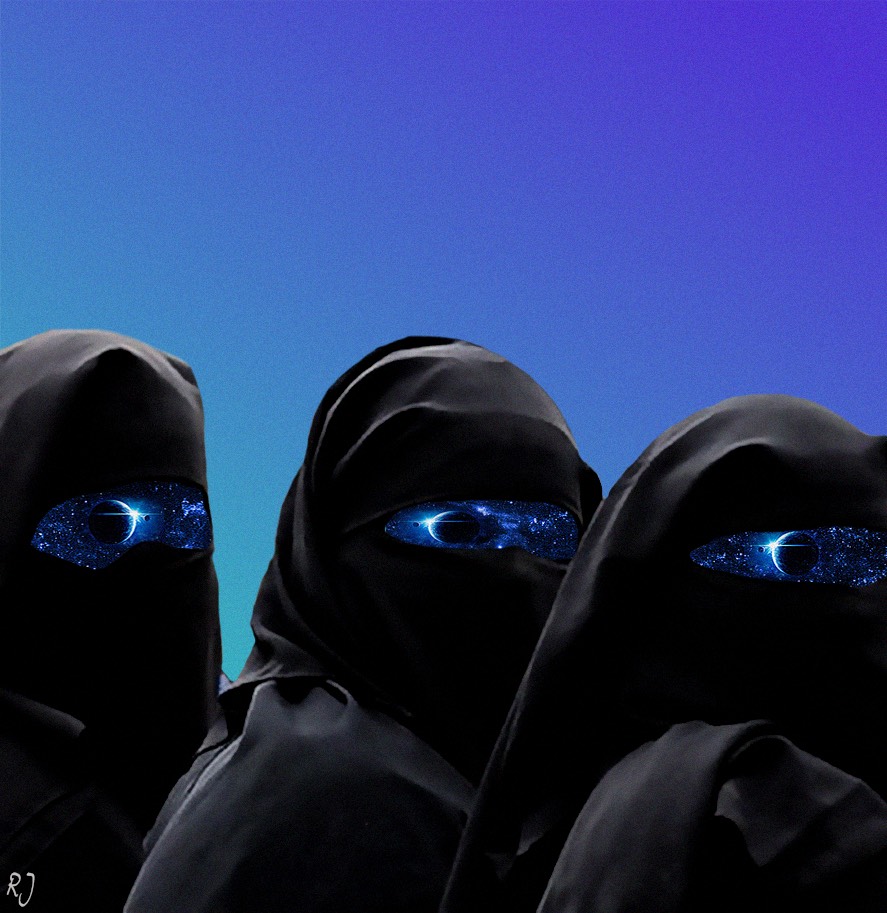 Q: What do you hope to see now that Black History Month has passed?
R: I hope all the Black artists that are being tokenized in this month, who are accepting gigs this month knowing that any other month these gigs won’t be available to them, I hope those same artists are hired past February. I hope those same Black folks are given those same opportunities. And I know they won’t, which is so frustrating and so aggravating. That’s what I hope every year. And every year I’m still hopeful that this will be the year that Black people will not only have jobs in one month of the year.

Follow and learn more about Riya Jama’s work on her Instagram page. Browse through our blogs to learn about other change leaders we’ve had the privilege to support.