Growing Up Muslim in the Maritimes

In my town of Sackville, New Brunswick the population is a whopping five thousand; three thousand of that is students that attend the local liberal arts college. Before I moved to New Brunswick in 2000, I lived in large metropolitan cities that were teeming with life, diversity, and the comfort of several cultural pockets connected to my South Asian heritage. In Sackville, there were no Muslim or Pakistani people when we first arrived in the midst of winter. We had to build and find our community for the first time, like many before us, those who had made the Maritimes their home after coming from “away.”

A few months after arriving, my father spotted an Arab family in a town thirty minutes away from ours. He approached them to say his salaams and to ask if they knew where he could purchase halal meat. They connected us to Nasreen Aunty, who was and still remains an institution in the Maritimes in Muslim and South Asian communities. Through her, my parents found pieces of community from different and familiar parts of the world. My childhood was filled with lunches at our Sikh family friend’s home, dinners with Algerian and Malian families, and chai with members of the Hindu community. Bringing together this ragtag community often meant driving for forty-five minutes to three hours,one way, just to connect and find a semblance of home in our new surroundings. 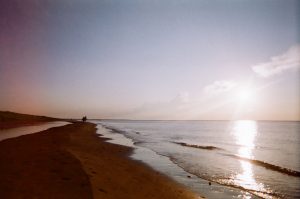 Photo taken in Sackville by Manaal

We found ourselves becoming part of a growing Muslim community as well. There were Ramadan dinners and New Brunswick got its first mosque. As well, Muslims from Nova Scotia, New Brunswick, and Prince Edward Island connected with each other and built networks. This was what the multicultural promise of Canada looked like to me as I was growing up– long car rides and community dinners in whatever hall or Church could be rented out.

Around that same time, I also had my first introduction to New Brunswick’s not so subtle xenophobia. I was playing basketball one day during recess and the local coach who ran several sports teams in the town approached me and asked me to try out. I was excited about the invitation, but dismayed when I realized I had to wear shorts and that the uniform was mandatory. I felt embarrassed showing my legs, which had noticeably darker hair compared to my white peers, so I wore sweatpants instead.

Upon arrival to the tryouts, my mother and the coach began speaking. I learned I wasn’t allowed to wear sweatpants, even though my mother explained I was more comfortable in them. The coach responded dismissively, “You people can’t show your legs anyways, right?” My mother was flustered, and confirmed that was true. Even though I towered above my classmates, I didn’t make the team. The same coach was involved in most other sports in town as well. Year after year, I continued to try out but I still didn’t make it on to any teams. There were less than two-hundred children in my small elementary and middle schools, and coaches had to actively search for players to make a complete team. It was a clear message.

The same coach, who was from a notable family in the town, never really acknowledged my mother or I after that encounter– even to this day. Sackville was, and is, a small community, and word gets around. Even now, people within the coach’s immediate circle don’t associate with my family. There are no smiles or head nods, basic courtesies that are so common even among strangers in small towns like mine.

After 9/11 things changed drastically. I remember a classmate I had grown up with who told me during class, “Muslims don’t belong here and are evil.” I was stunned. I had known this classmate since elementary school–we’d built snow forts and played soccer together. A Jewish friend of mine, another minority in the school and province, stood up for me as the teacher remained silent and unfazed. We, the minorities, truly had no one else, so we had to create our own community and defend each other. 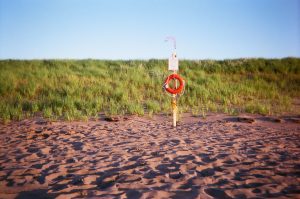 Photo taken in Sackville by Manaal

Post 9/11 we also began getting prank calls at home, telling us to go back to where we came from, and in mocking South Asian accents they told us we, “mooz-lems,” were unwelcome. In a town this small, everyone knows where you live, so my father went to the police. They told him they weren’t able to do anything, as they didn’t see it as being a threat of violence. My parents decided to take their names out of the phone book. My father’s first name is Muhammad, so my parents figured that’s how callers determined who to target. Shortly after, they legally changed my brother’s first name, also Muhammad, to make it his middle name to try and avoid similar targeting.

Despite these incidents, the people I grew up with were a large part of my life and shaped who I am today. I don’t harbor ill will towards my peers. We were all children without access to proper education and decent role models, so how would they know better? The New Brunswick public school system is one of the worst in the country, due to lack of funding and resources, and a stagnant curriculum, especially when compared to Ontario or British Columbia. Some of my immediate peers, who once were part of my everyday life, are now are supporters of Trump, white nationalism, anti-Semitism and the alt-right. I can’t help but wonder if perhaps more robust education and access to resources could have led them down a different path.

The people I hold accountable are the adults who had access to education and resources who actively participated in xenophobia and discriminated against families like mine. Many of the people I know from New Brunswick who belong to a minority group have similar or worse experiences, particularly Indigenous and Black New Brunswickers. While we share a love for these places we call home, it’s bittersweet because there’s a daunting sense that you’ll never be truly considered a part of the fabric of this community unless you’re white. Regardless, the demographics of the province are changing with more immigration and slightly more dialogue around race.

I’m still a little skeptical that New Brunswick can become a truly accepting place for people of colour, since the province, much like the rest of the country, hasn’t come to terms with its treatment of Indigenous peoples. There can be no truly welcoming or open version of New Brunswick unless the Mi’gmaq and the Wolastoqiyik (Maliseet) receive the justice they deserve, and Black New Brunswickers, Arabs and others who settled on the land generations ago, have their histories acknowledged.

Until then, I’m holding my breath and hoping that a welcoming New Brunswick is possible in my lifetime; marginalized people on this land deserve an equitable and accessible New Brunswick. It can be a beautiful place to live, it just needs to be that for everyone.

Manaal is a writer and community organizer in Toronto. She primarily writes about issues pertaining to violence against women, Islamophobia, South Asia and race.  You can find her on Twitter @ManaalFarooqi.

Contact us
SIGN UP FOR OUR NEWSLETTER HERE
Copyright 2017, Inspirit Foundation, a registered Canadian Charity (#119286748RR0001). All rights reserved.