Civic participation is an important tool for creating lasting social change, particularly for racialized and marginalized communities. Particularly for Calgary-born and raised Ilyas Gora, getting involved in the political process is critical for getting his community’s collective voice heard. “If you don’t have a seat at the table, at least you can be in touch with someone who has a seat at the table,” he says. As part of our strategy to bring change leaders into decision-making spaces, we collaborated with Samara Canada to support Gora as a participant at the Banff Forum, an annual conference which brings together academics, politicians, business and community leaders to discuss issues shaping the country’s economic, social and political fabric. Gora was joined three Inspirit-supported change leaders Sarah Jama, Kluane Adamek and Max FineDay. We recently caught up with Gora to learn more about his work and what his experience at the forum was like. 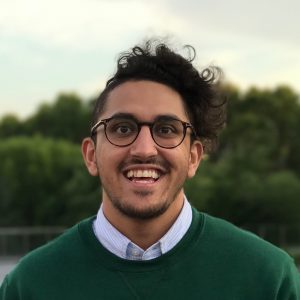 Q: What’s keeping you busy at the moment?
Right now it’s my first semester of law school at the University of Alberta. I was born and raised in Calgary so it’s really cool to be in a new city and get a new perspective and hopefully I hope to go back to Calgary after I get my degree. I’ve in Calgary my whole life so it’s nice to get another perspective even though it’s just a couple of kilometres up the road.

Q: You have a long history of community and civic engagement work in Calgary. Can you tell us about that?
Some of the more non-partisan things I’ve done at the University of Calgary was helping to start the group called Get Out The Vote University of Calgary–GOTV UofC–during the 2015 provincial election. We started off with a table and we worked with the student union to get out the vote. We collected a couple thousand names and contact information so that we can call people on election day and remind them to vote. It was actually very successful in terms of engaging people on issues that matter to them, especially when it comes to provincial issues.

During the federal election in October 2015, I was involved in the Muslim community, not just trying to encourage people to get out and vote but more so to get out and make an informed decision. We had some tables at local mosques; again, getting people informed and getting them the information they need to make that decision. We also gave them their poling station and all that information they need to vote. We were really trying to lower the barrier, which I think is the most important thing, and that means getting the information out. That’s been my experience: I feel especially in marginalized communities and among racialized peoples, they feel that sometimes it’s hard to access the political system or it’s something that’s reserved for people of a certain class. But my experience has been the complete opposite. The people I know or have known personally–all it takes is a little bit of will power and putting yourself out there. So I’ve just really a positive experience with the political process and I hope to share that with people.

Q: Why do you feel it’s important for Muslim communities to be involved in the political process?
That’s where a lot of the systemic change can be made. I know a lot of people who get involved in their own communities to bring about positive change, which is really helpful as well, but to be part of the larger discourse is important. Just being a presence is also a very valuable thing for people. Because when engage in political spaces or with politicians, they know what are the issues that matter to you. If you don’t have a seat at the table, at least you can be in touch with someone who has a seat at the table. I think the responsibility is on us; well I think it’s two-sided but I think the responsibility is also on people to get informed, engage and get involved.

During the most recent municipal election in Calgary I was again involved for the third time in the Nenshi campaign. I ran a cool community engagement project which is The Purple Picnic. Nenshi has always been associated with the colour purple–it’s a mash between red and blue, it’s neither left nor right. He told me to take on the project to get out in the community and I started with this idea of a picnic table. I bought a picnic table from Kijiji and we painted it purple and we just went out to communities [with it]. We went out to different neighbourhoods in north-east Calgary, which is more of a minority-heavy area and we just talked to people, engaged them in conversation, trying to find out what was important to them. It really started the conversation around what they wanted from the city. You can look it up on Instagram @purplepicnic. We had a cool social media campaign around that. I think it was really fun and again it wasn’t necessarily political in the way that people would traditionally think of. I think it’s important too—that when it comes to politics, it doesn’t have to be just lobbying and protesting. It’s the little things–just conversations and talking about issues you care about. In general for me it’s about the engagement and making sure people have their voices and know that there’s a way to be heard. I think that’s the most important thing.

Q: You also worked on IftarYYC. Can you tell us about that?
IftarYYC started in 2015. It came about from seeing things in the news about people being suspicious of Muslims. I think it came down to not knowing Muslims and just not recognizing who are the Muslims in their community or their workplace. We’ve had people come up and say, “Oh we didn’t know you’re Muslim,” but who are part of the community. We invited people from all different backgrounds and we had it at a very central inner-city neighbourhood in Calgary. It was just in a park, which was actually really cool. We gathered and sat on the ground; everyone came down, [including] different politicians from different backgrounds. We had community members who were just walking by join us. It was people coming together and getting to know their neighbours. I saw a parallel [between IftarYYC] and something that they talked about at the Banff Forum around Indigenous communities and trying to work to break down those stereotypes by getting to know your neighbours–engage with them, understand their perspectives and their hopes and fears and all the things that we all share. There were 2000 people who came. We had food. It was just about community.

Q: Why were you interested in attending the Banff Forum?
The main thing for me was being in a space where there were these community leaders and political leaders and people from the business community, and trying to learn from them through osmosis. Just being able to interact with them and share what I was working on was helpful. To be part of that network was really valuable professionally and also personally. In a space like that you just get out and put yourself out there, start conversations. The environment was also super inviting. It was a good space to be in.

Q: What was your biggest highlight from the forum?
On the last day in the afternoon we had an activity around indigenous history 101 where we went through the history of Indigenous people in Canada and some key events. It was awesome because you have these law professors and you have business leaders [participating in] this activity, and it’s interesting to see that we didn’t do that well [as a country]. It shows how little we know about Indigenous history. This exercise really opened my eyes on some of the key incidents and some of the challenges we have. One of the things that really stood out to me was that the last residential school closed in 1996, in my lifetime. Again, these are ongoing issues. It was really cool that people of different Indigenous backgrounds were there to share their story; that’s really important as well–hearing from people themselves, the challenges they faced in the community and how we can be allies and supporters in addressing those challenges. I’ve always been someone who wants to take action and not just sit by, so it’s inspiring to be in a space where there are other people who are doing those things–leaders in their own spaces and helping to shape their communities in whatever capacity they can.

Q: Did you meet anyone interesting?
I know Mayor Nenshi quite well [because] I worked on his campaign [and] I see him quite often in Calgary. But as someone who’s new to Edmonton, I wasn’t really involved in the political process here [in Calgary]. It was really awesome to meet Mayor Nenshi and Mayor Iveson. We had lunch at the same table with Nenshi on my right, Iveson on my left. It was really cool to have an Alberta conversation with them. It was awesome. That was a highlight for me. I’m definitely grateful to Inspirit for facilitating this and it was really cool that they had the opportunity for people of different backgrounds and not necessarily just CEOs to attend. That was really valuable. Again, on a personal level, it supported my view that anyone, regardless of your status or where you are, has the capacity to be in these spaces and engage with decision makers.