TORONTO, August 17, 2022 — Seventeen Canadian Muslims from across the country have been selected to join the inaugural Cohort of Inspirit Foundation’s Narrative Change Lab (NCL).

The Narrative Change Lab aims to shift the story for Canadian Muslims, by using a pop culture lens and focusing on narratives, audiences, and power. What would narratives look like for Muslims if they were designed and developed by Muslims? Over five months, the Lab Cohort will explore this question and more.

Through a rigorous process of networking, research, and conversations with Canadian Muslims who are actively engaged in arts and media, we are excited to announce the NCL Cohort: 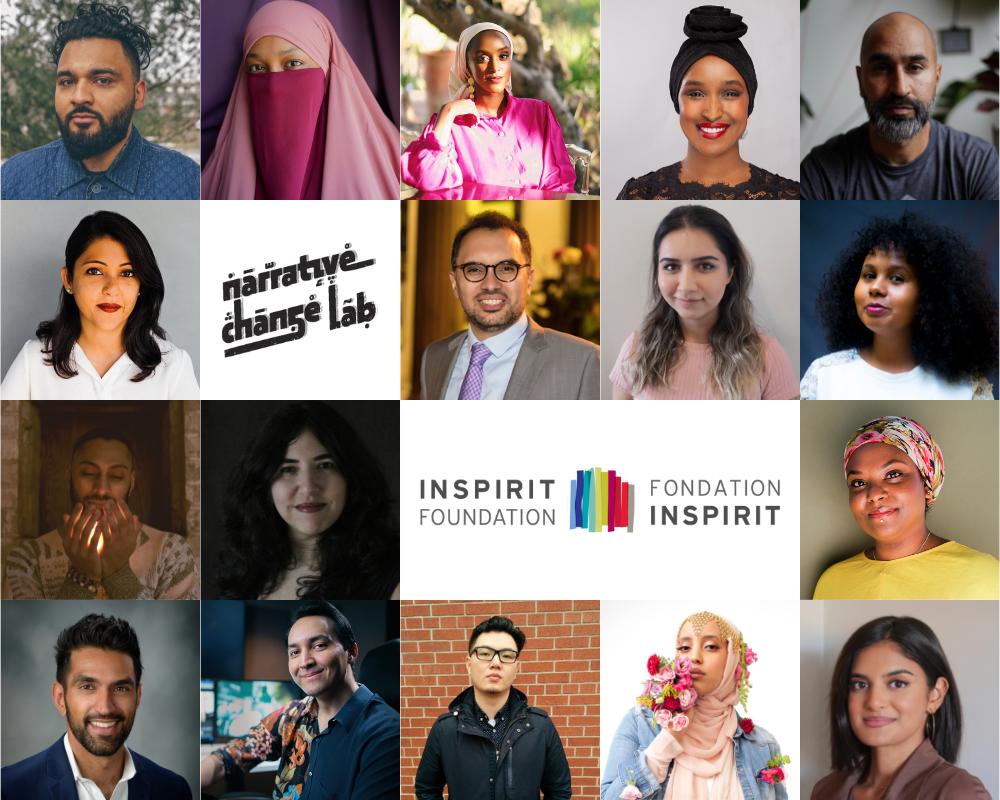 “We know dominant narratives shape our understanding of others; the most harmful of these lead to all kinds of systemic barriers, and in some cases, the killing of Muslims. In 2020, we launched the Narrative Change Lab with a focus on reimagining Muslim narratives.  This Cohort of exceptional folks in media and arts is part of the brain trust that will move the Lab to the next stage.”

“The Narrative Change Lab is an extension of Inspirit’s programming and granting focus on shifting narrative power. I’m excited to see how the energy and creativity of this Cohort can enrich our collective understanding of narratives by and from within Muslim Canadian communities.”

“Being Muslim in Canada has never been easy. But it doesn’t have to be that way. Designing the Narrative Change Lab was complicated because there is no single solution to shifting narrative landscapes. But I’m excited that this Lab has been developed intentionally to sit deeply and authentically in everything Muslim. The Cohort is an amazing example of the many ways Muslims in Canada are changing spaces. And this program is a first step to collectively working on our narratives, deciding how we want to be seen in the public space.”

“I hope this Lab succeeds in creating more Muslim-inclusive spaces in the arts, one that does not compromise moral integrity, nor creative and artistic vision. I’m particularly interested in exploring the lack of representation and involvement of Muslim youth and women in the arts and what that involvement can look like in a healthy and sustainable way that does not succumb to the fraught and problematic demands of the film and art industries at large.”

“Narratives played a powerful role in telling our history, which still shapes how we are perceived today. I think it’s crucial that we assert ownership over our narrative now, so that we can center it on our Truths and leave it in better shape for the future.”

Inspirit Foundation funds media and arts for social change, supports young changemakers, and invests its assets to align with its mission to promote inclusion and pluralism in Canada—specifically addressing discrimination based on ethnicity, race, or religion. To learn more, visit inspiritfoundation.org and follow Inspirit on Twitter, Instagram, Facebook, and LinkedIn.