By Jory Cohen, Director of Finance and Impact Investment

With a first dose in my arm, I’m feeling like we’re finally seeing the first rays of light at the end of the tunnel. There’s still a long way to go until we shed the masks and social distancing, but the first dose definitely injected a little bit of hope. As Jill and I continue to follow guidelines and limit Hayzen’s exposure to others outside our family, we remain concerned about the long-term effects of minimal social interaction in the first years of his life.

Speaking of Hayzen, our big personal news is that he will soon be joined by a sibling. We’re expecting another little one at the end of the summer, which is both exciting and, quite honestly, nerve-wracking too. The idea of having two kids under two years old is…intimidating. I’m confident we’ll be fine and we’re certainly looking forward to meeting our little one, but I’d be lying if I said I wasn’t concerned about balancing family responsibilities, work duties, and life in general. While part of me wants to dedicate this post to soliciting parenting advice, it probably makes more sense to focus on our most recent investment in Organic Garage, a mid-sized grocery store chain specializing in organic and natural products.

The history of Organic Garage is an interesting one. While the company was founded in 2006, the roots of Organic Garage date back to 1931, when the great-grandparents of Matt Lurie, the company’s current CEO, opened up a grocery store on College Street in Toronto. It sounds like Matt’s great-grandparents were quite the innovators, as their grocery store was one of the first in Ontario to carry refrigerated items and to be intentionally positioned as a one-stop shop. The norm during those times would have been to visit multiple specialty stores to buy groceries (i.e. butcher, dairy shop, etc.) rather than go to one spot for the entire grocery list. Although the store closed its doors a few decades ago, its slogan “We Sell for Less” was re-purposed to become Organic Garage’s mantra: “Healthier Food for Less!” 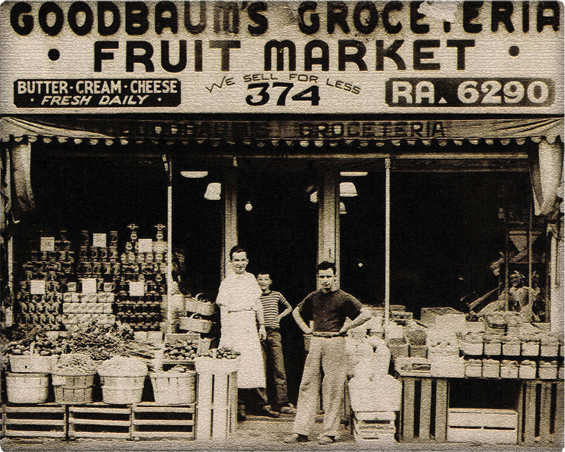 Organic Garage currently has five locations sprinkled around the Greater Toronto Area, with plans to open two more stores within Ontario over the next year or so. The grocery chain made its debut on the TSX Venture Exchange in 2017. Since then, revenues in 2018 were approximately $19.9 million, $23.6 million in 2019, and $24.2 million in 2020. Revenue for 2021 is projected to be around $29 million. It will be interesting to see if that projection is realized. While profitability levels over the years have been relatively small or negative, the company is prioritizing increasing sales margins and cost-reduction measures, such as switching from a centralized warehouse facility to a more decentralized distribution model. This transition is expected to allow for a nimbler supply chain and cost savings of approximately $1 million annually. I’m keen to follow their progress along these metrics.

It’s been an eventful couple of years for Organic Garage. In 2020, which is the year we initially invested in the company, the company’s stock price rose by approximately 90%. In early 2021, Organic Garage’s shares hit all-time highs when it announced the acquisition of Future of Cheese, a company focused on creating plant-based dairy alternatives like cheese, butter, and cream cheese. Since then, the stock price has fallen back to early 2020 levels, which I thought was a good time to buy more stock. 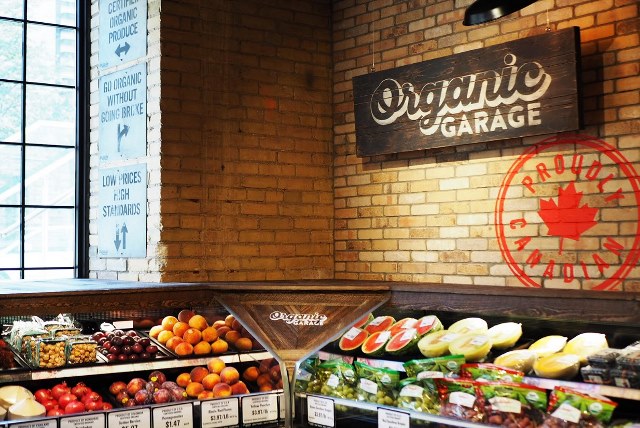 One major concern I have for the company is their governance structure. I don’t know the folks at Organic Garage personally, but as far as I can tell the Board of Directors is dominated by men, specifically mostly white men. I’ll be keeping tabs on the company’s diversity and inclusion practices and certainly won’t hesitate to sell our shares if Organic Garage doesn’t prioritize a more equitable governance structure and leadership team.

In addition to our bolstered position in Organic Garage, the other change to our portfolio is the maturity of our SolarShare bonds. Five years ago, we purchased SolarShare bonds, where the proceeds financed the operation of solar energy projects in Ontario. Recently the bonds matured, and while we’ve been satisfied with our investment and are generally fans of SolarShare, I felt we could use the extra cash as we prepare to make a relatively large investment in a private company. More on that in future posts.

Prior to our investment in Organic Garage and the maturity of our SolarShare bonds, 28% of our portfolio was transitioned to increase its positive social or environmental impact. After those changes, 30% of our portfolio can now be considered impact investments.

Organic Garage’s market cap is about $23 million, classifying the company as a small cap stock. While the investment in Organic Garage doesn’t bring a significant change to the portfolio’s asset mix, it’s worth noting that we’ve been building up cash reserves in order to allocate a considerable chunk of our portfolio to the private investment noted above. Because of that, you can expect our cash allocation to be significantly reduced in the near future. 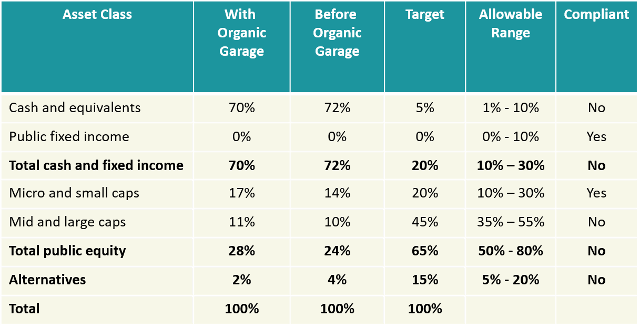 As the summer approaches, and our baby grows from the size of a head of broccoli to a cantaloupe, we know this new little one is coming soon. Parenting advice is welcome.