During my first week of law school, I had a difficult conversation with a fellow classmate. He was the third generation in his family to pursue law. “So, who in your family is a lawyer?” he asked me.

For him, this was a seemingly harmless question, but our conversation left me feeling displaced and doubtful. How was I supposed to explain to this new classmate—a white man who came from a family of lawyers—that I am the first person in my family to go to university, let alone law school?

I am a Mi’kmaw woman from Pictou Landing First Nation, and I have always known I wanted to live a purposeful life and contribute to positive change for Indigenous peoples and communities. Very early on in life, I became aware of the mistreatment and devaluation of Indigenous peoples within Canadian society. In my own community, I witnessed first-hand the injustices faced by Indigenous peoples in the legal system and the intergenerational impacts of the Indian residential school system.

A significant component of who I am relates to where I come from: my family, my ancestors and our histories; Mi’kmaw traditions, values and beliefs; and the importance of our traditional and unceded territory of Mi’kma’ki (Nova Scotia). As a young girl, I found it difficult to comprehend why others did not see beauty in my culture. I take great pride in who I am and have always been taught to do so. My culture is more than my identity; it is my strength.

This is part of the reason I had mixed emotions about going to law school. When I was first accepted to Dalhousie University’s Schulich School of Law, I felt a sense of achievement, pride and excitement – but self-doubt, worry and fear also clouded my mind. I believe in education as a powerful tool and a key to achieving my goals, and yet, after facing challenges such as financial barriers and systemic racism, my doubt began to outweigh my optimism about law school. My conversation during that first week made me wonder, “Do I really belong here?”

Historically, Indigenous and mainstream societies have embraced differing concepts of education. Their ideas and approaches to learning offer two separate perspectives of the world. As a post-secondary student, I often feel I exist at this intersection of Indigenous and western cultures and walk with a foot in both worlds. I often struggle to understand and while challenging the mainstream culture in which my education takes place. It can be a challenge trying to find a balance between learning mainstream legal systems imposed by law schools in Canada, and Indigenous legal traditions—which I must do on my own. There are many forms of Indigenous laws: our languages, histories, stories, traditions, song and art. These laws were bestowed upon us from the Creator as our responsibility to Mother Earth. There are many ways to see the world; yet this does not make one superior over the other. It is time to make space for our laws so they can become vibrant again. Still, I must navigate this western society in order to succeed. 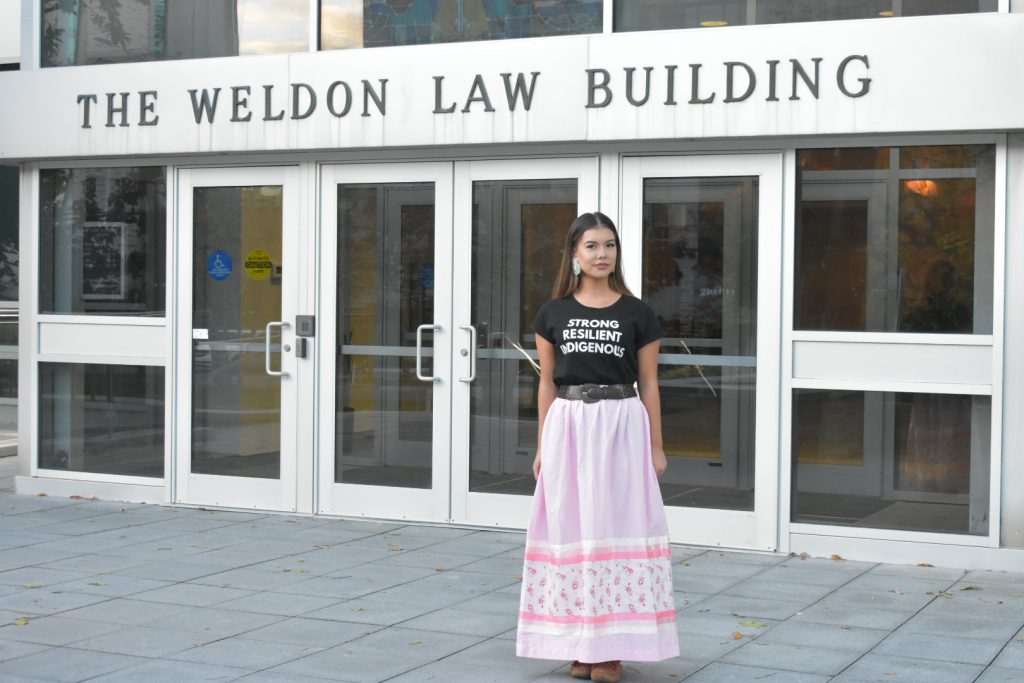 “It is disheartening to see the justice system continuously fail Indigenous people, but I have learned to use this as a motivation to succeed rather than a reason to doubt myself.”

Growing up in a small Mi’kmaw community, I learned that our knowledge comes through experience and is passed from one generation to the next. Knowledge Keepers hold and nurture our Mi’kmaw values and traditions, which stem from sharing, respect and strong kinship ties. Historically, the Mi’kmaq were not tied to geographical boundaries but lived with the seasonal cycles of the land, adapting to changing conditions and the needs of our people as a nation.

In Canadian history, however, colonizers have often withheld education to keep marginalized and impoverished people under their control. Just over 50 years ago, Indigenous peoples in Canada were not allowed to hire lawyers without permission from the government, nor could they enter law school without first surrendering their Indian status [1]. The purpose of enfranchisement—and the loss of Indian status—was to assimilate and “civilize” Indigenous peoples with the ultimate goal of solving what Duncan Campbell Scott, department head of Indian Affairs in 1910, referred to as the “Indian problem.” For Indigenous people, however, enfranchisement meant giving up their identity, culture and sense of belonging. The Indian Act is problematic in that the Canadian government is keeping to the colonial structures it imposed on Indigenous peoples throughout history by determining who is ‘Indian’. Indigenous peoples are the only group in Canada that must carry a government-issued card to prove their identity. As problematic as the Indian Act may be, enfranchisement meant those who lose their status also lost the ability to pass on status to their children, thus severing ties to their ancestry and community. Enfranchisement meant Indigenous people could not interact with non-Indigenous society in a meaningful way without losing status. In many cases, enfranchisement further separated those individuals from their communities physically, socially, spiritually, psychologically and emotionally.

Yet, we are still here. In 1951, the Indian Act—which included provisions such as “compulsory enfranchisement” [2] that force an Indigenous person to surrender their status to attend university or achieve professional designation as a doctor or lawyer—was revised, and the more oppressive sections were amended or taken out.

Since then, a number of Indigenous people have succeeded in the field of law, an area that had been, up until recently, off limits. I, too, am following in their footsteps by pursuing a Juris Doctorate degree. My goal is to be able to create positive societal change. Yet, as an Indigenous woman, I know I am stepping into a place that was created to make me feel inferior.

It is disheartening to see the justice system continuously fail Indigenous people, but I have learned to use this as a motivation to succeed rather than a reason to doubt myself. In contrast to statistics related to Indigenous peoples, I can only see the barriers I’ve overcome and the things I’ve achieved in the process. My culture has become my backbone, and the Indigenous people who have come before me are a pillar in my foundation. Strength and resilience are embedded in my Indigenous DNA, which continues to empower me to thrive in the unfamiliar territory of Canada’s educational institutions.

Other Indigenous students at Dalhousie share experiences similar to my own, and we have learned to come together and support one another. Strong kinship ties have always been of great importance to Indigenous people and continues to be so in post-secondary institutions. As co-president of the Dalhousie Indigenous Law Student Association, a student-run organization that offers a safe space for Indigenous law students, I have taken an active role in supporting both myself and other Indigenous students. It can be challenging to be away from family and community during the academic year, yet wherever I go, I can connect with my culture and ancestors through prayer, smudging and family, both biological and chosen. I have found confidence and direction in my culture.

There have been various highs and lows throughout my educational journey, and I still sometimes question whether I belong within an institution that has historically been used to exert superiority over Indigenous peoples. However, my cultural identity and practices have sustained me. My ancestors have paved the way for me to have the choice to attend law school, and it is my duty to continue the fight towards a better tomorrow for Indigenous peoples and communities in Canada. I believe I have been given the strength to continue this journey, work hard and open doors for future generations as my ancestors have done for me, because the success of one Indigenous person is the success for all.