Jason Ryle has been part of imagineNATIVE Film + Media Arts Festival for over fifteen years. In March, the organization released On Screen Protocols & Pathways —a resource for anyone who wants to create content related to Indigenous communities in Canada. Inspirit was a funder of the document, and also supported imagineNATIVE’s Film + VR tour. We recently sat down with Jason to talk about where Indigenous TV and film is headed in Canada, and why Indigenous cinema is more than a genre. 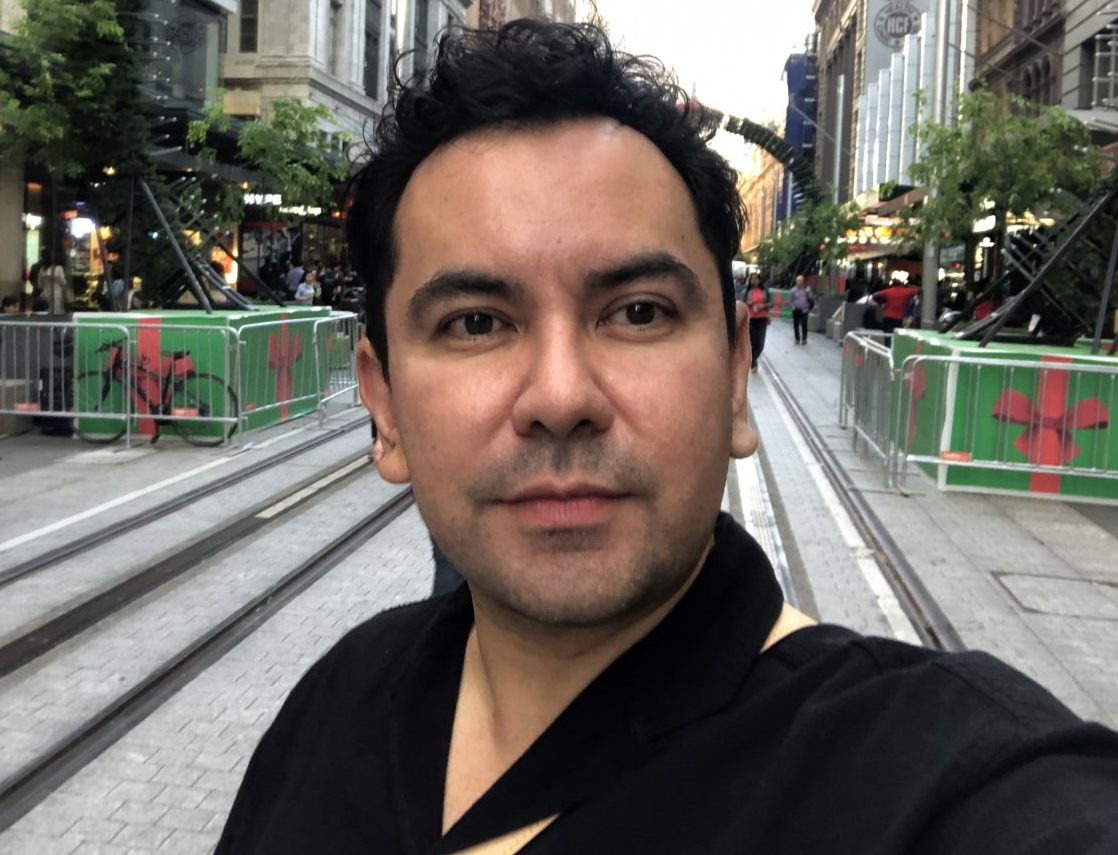 Q: How did you come to be part of imagineNATIVE?
JR: I joined the organization as a youth board member in 2002. My boss at the time—I was working for a small publishing company—was on the board of imagineNATIVE and I was invited through her. I sat on the board for seven or eight years. In 2010, when the position of Executive Director became available, I put my hand up for it and was hired in July of 2010. I was the Executive Director initially, and now I’m the Artistic and Managing Director but still overseeing the operations and the artistic elements of the organization. That includes the festival, the tour and, now, our Institute, which oversees all the professional development initiatives that we undertake.

Q: What attracted you to the work of imagineNATIVE?
JR: I’ve always been interested in film. And pursuing film as a filmmaker or some other capacity was always of interest to me. I really think screen-based work can entertain, educate and inform, but also make a huge impact and change lives and inspire people. It did all that for me and it was one of the attractive features of the role.

Q: You’ve always maintained that Indigenous cinema is not just a genre. Why is that?
JR: Like most niche aspects of cinema, there’s always a preconception of what they are and what they do. I think Indigenous peoples, especially Indigenous North Americans, really inhabit this space within global cinema and the international psyche. The misrepresentation of Indigenous peoples, especially Native North Americans, on screen really engendered an idea of who we are and who we were in the global psyche. This “Hollywood Indian”—I think that’s so prevalent and so pervasive. I find that there’s a perception that Indigenous cinema is depressing, that it’s really heavy documentary-type work about residential schools, and missing and murdered Indigenous women. So, of course, doing the work that we do at imagineNATIVE and the work that filmmakers and other Indigenous film festivals around the world are undertaking is to really subvert that, to show the diversity of screen-based storytelling from so many different filmmakers. I think my dream, as I would say it, is for everyone, is that we wouldn’t need an “Indigenous cinema” label. I would much rather have Anishinaabe cinema, or Inuit cinema or Maori cinema. But until we get to that place, I really do think that when we speak about Indigenous cinema, it should be like when one speaks about European cinema: it’s a body of nations telling stories but within that there’s so much diversity and so much depth. 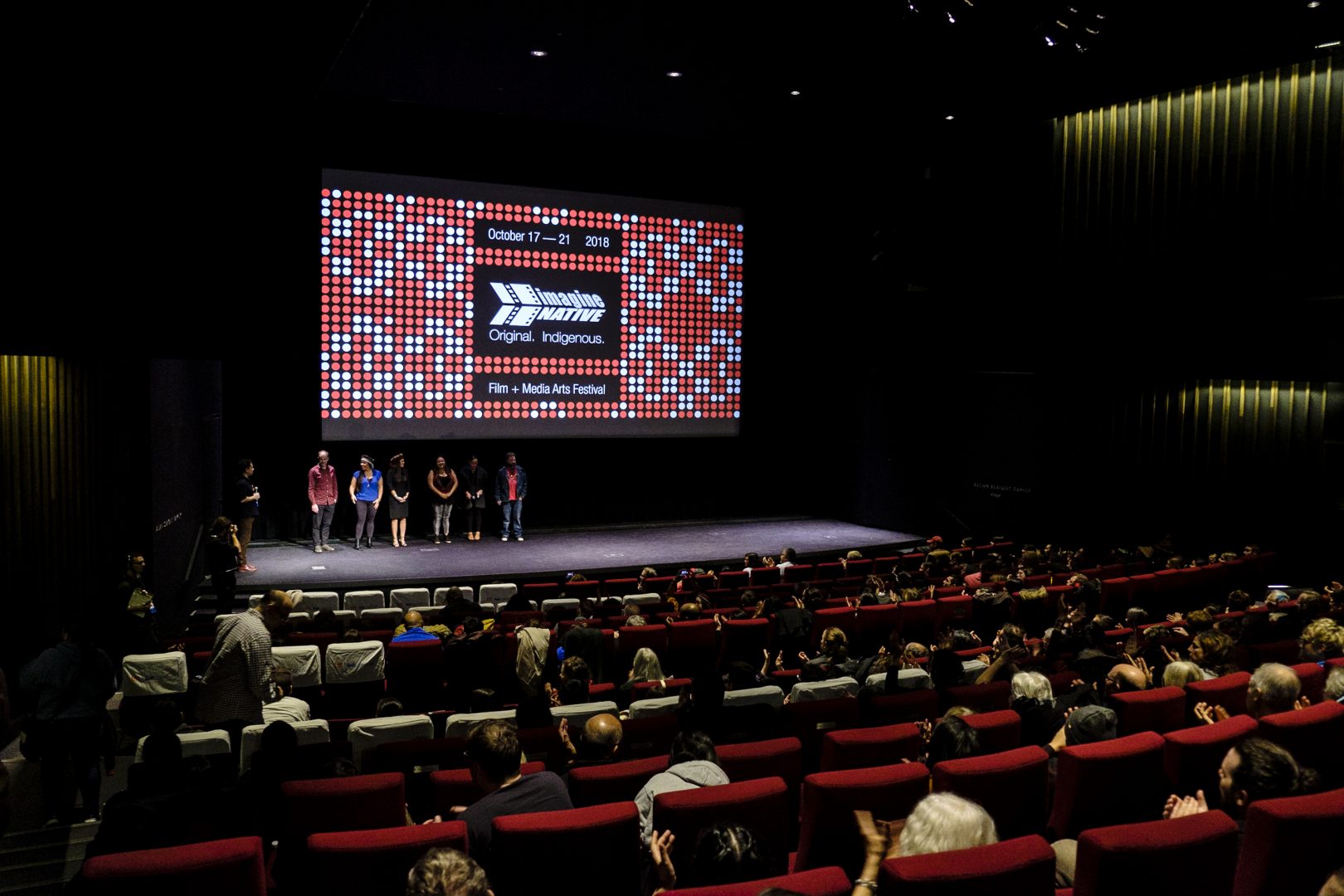 Q: What makes you hopeful about Indigenous cinema?
JR: I think it’s a very exciting time. I’ve been doing this work for a very long time and imagineNATIVE has been running for 20 years now, so a lot has changed in that time. I’m excited about the continuously rising number of Indigenous artists telling screen-based stories. I’m excited about the Indigenous Screen Office coming to the fore. All these different opportunities are taking shape. And I’m excited about the increasing awareness of non-Indigenous people—especially decision-makers—understanding why it’s important for Indigenous peoples to tell these stories themselves. Within all of that are opportunities for Indigenous peoples to tell the stories that they want to tell, not prescribed to from a non-Indigenous or decision-maker’s perspective. And that’s where we see the diversity. I mean these stories—stories of residential schools and post colonial trauma—those are really important because film is healing. And I always contend that in the similar way that Jewish filmmakers would tell stories about the holocaust or African-American filmmakers would tell stories about the civil rights movement, I think these will be continuous aspects of our cinema, of our screen cultures. At the same time there’s the emergence of science fiction, rom-com, and experimental film—that’s what we’re seeing really rise to the fore, which is exciting.

Q: There’s always this push for racialized folks to tell stories about their trauma and their struggles and the same can be said for Indigenous storytellers.
JR: That’s true. So much of that is what people have been fed about who we are and what our lives are like. So they relate to us from the point of the trauma and the negativity and the hardships that we’ve endured and faced. That’s largely the understanding of what our drama is, but it’s not always the case. Of course we all deal with these issues, not just Indigenous peoples but everyone in this country deals with them and should deal with them. But in terms of telling stories on screen—that’s where the diversity comes. And it’s not like Indigenous filmmakers only now are wanting to tell a diversity of stories. They’ve always wanted to. They just haven’t been given the access points and the opportunities to do that or have really understood the lens through which these filmmakers wanted to tell these stories. Darlene Naponse’s film, Falls Around Her, the one that we opened with this past imagineNATIVE film festival, starring Tantoo Cardinal, in her first starring role after almost 50 years in the industry—that to me really represents so much of this new wave of Indigenous cinema, especially feature films. It’s a film that’s so deeply rooted in community and addresses very specific issues but doesn’t swim in them or bring them to the fore. They’re just embedded in the DNA of the characters and that community. I think it’s so brilliantly done. It’s done in such a subtle way and I don’t know if that was picked up enough in terms of the larger commentary about that film. But to me it really represents so much of what I’m excited about where our cinemas are going. 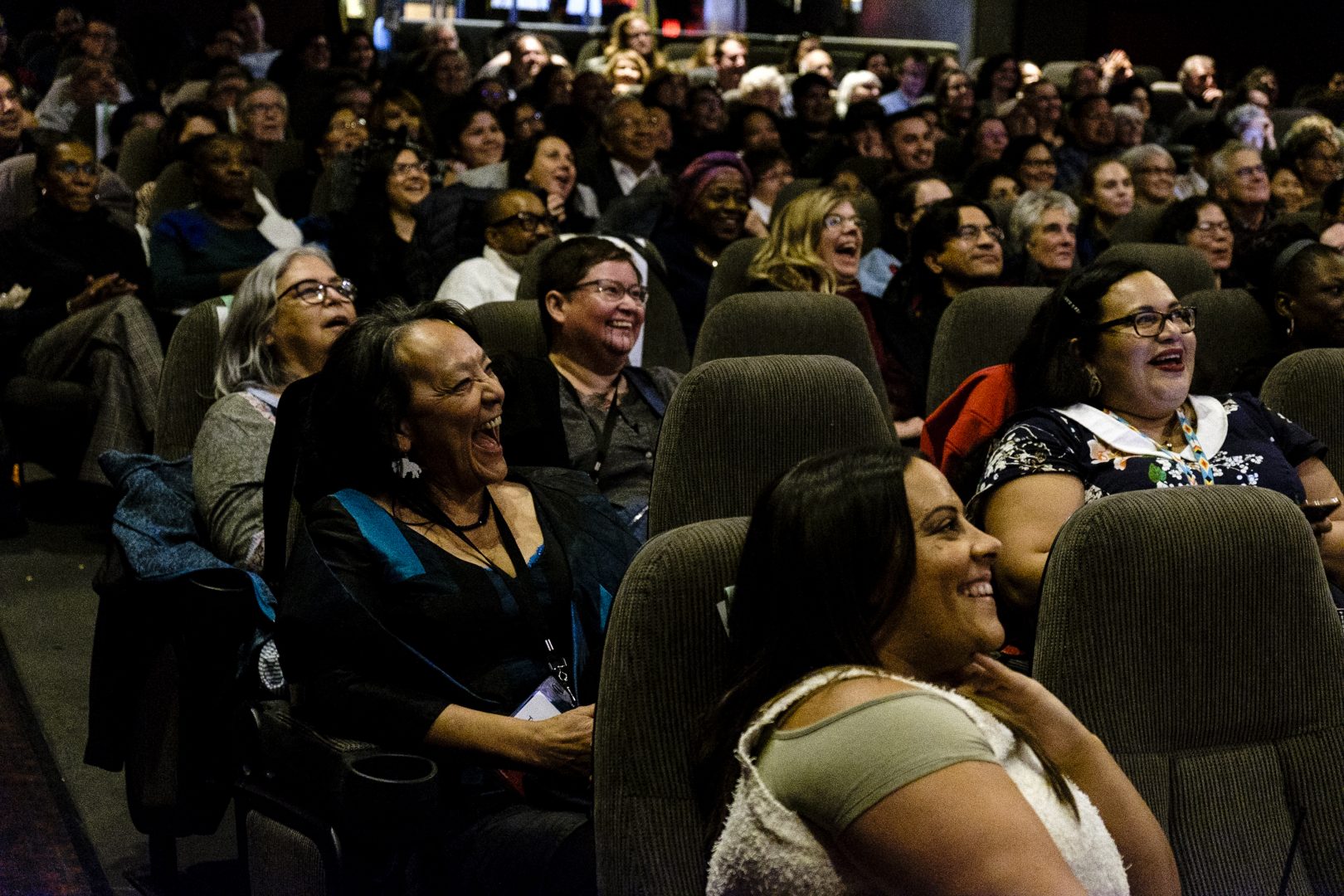 Tantoo Cardinal (second row) was in the audience during the premiere of Falls Around Her, her first starring role. (Photo by Mike Tijoe)

Q: What impact do you hope to see from the work you’re doing at imagineNATIVE?
JR: I want us to change the world. I really do. Alanis Obomsawin—she’s incredible. She’s continuously incredible and she consistently raises the bar in terms of what she makes. She’s 86 and she makes at least one film a year. I have the pleasure of knowing her and spending some time with her regularly and we talk about the issues we’re facing personally and professionally. But she always comes back to the fact and always grounds it in the fact that, over the course of her life, things have changed tremendously to the point where she would never have expected certain things that she sees now, that people take for granted now. Everything from Indigenous doctors to Indigenous lawyers, and certainly the proliferation of Indigenous filmmakers and the support that we’re getting. So to me that shows positive change and to me as someone who works in this field and as someone who’s near the mid point of my life, I think of Alanis and my mother, and I think of my nieces, I know the fight that they fought and are fighting is different than the one that I’m doing now, all for hopefully creating a reality where the life that my nieces experience will be very different than ours. The first time I really saw a glimpse of it was about a year and a half ago at a conference on Indigenous futurism in Winnipeg. There were three youths who did presentations, they were all late teens, and there was something about their presentations that really struck me. It took me a little while to unpack it. It was actually the first time that I really heard in that context that Indigenous generation that we’ve been working to visualize and help actualize, if those are the right words. By that I mean Indigenous youth who grew up with the diversity of Indigenous media content, who grew up with a diversity of Indigenous artistic and literary content, and Indigenous role models, and who can exist in this Indigenous world in a very different way than I did or anyone else did because of the factors of our life. It really is that impact of this Indigenous cultural resurgence that’s going on. Reclamation, renaissance, whatever we want to call it, and that’s incredibly exciting.

Q: It must be exciting to be able to see the outcome of your work within your life time.
JR: Collective work. There’s still a lot to do. And there’s still a lot to be worried about and, truthfully, to be fearful of. But again, there’s progression and there’s solidarity and the more we do this work, the more we educate and inform. Those are really the key aspects of the work.

Q: What are your thoughts on, and hope for, the Indigenous screen protocol?
JR: That’s something that I instigated through imagineNATIVE. Through the work that I do, and have done at the organization over time, we’ve been contacted consistently, sometimes daily, by non-Indigenous filmmakers, producers and funders wanting information or context. Very often it was non-Indigenous filmmakers who were looking, basically, for an Indigenous stamp of approval on a project that was always almost complete. So it was frustrating to see this country continuously support films made by non-Indigenous filmmakers with Indigenous content, that I really felt was perpetuating misconceptions at best, or negative stereotypes at worst, and seeing these incredibly talented filmmakers that we present at imagineNATIVE who were struggling to get opportunities. And I still think that there’s a perception that the Indigenous screen sector is an emerging one, but that’s just really not the case. In my work I’ve had the pleasure of travelling for quite a bit including to Australia where Screen Australia, which is equivalent to Telefilm Canada here, has had an Indigenous screen office for about twenty-five years now. And for the past ten of those, they’ve had a protocols document that was very actively intended to ensure that negative stereotypes weren’t perpetuated, that proper consent was given, that meaningful collaboration was enacted, with film productions, Indigenous or non-Indigenous, that had anything to do with Indigenous characters, content, story and land. I thought we need something like that in Canada. I’m not sure if it’s going to be exactly the same thing but this would certainly work. 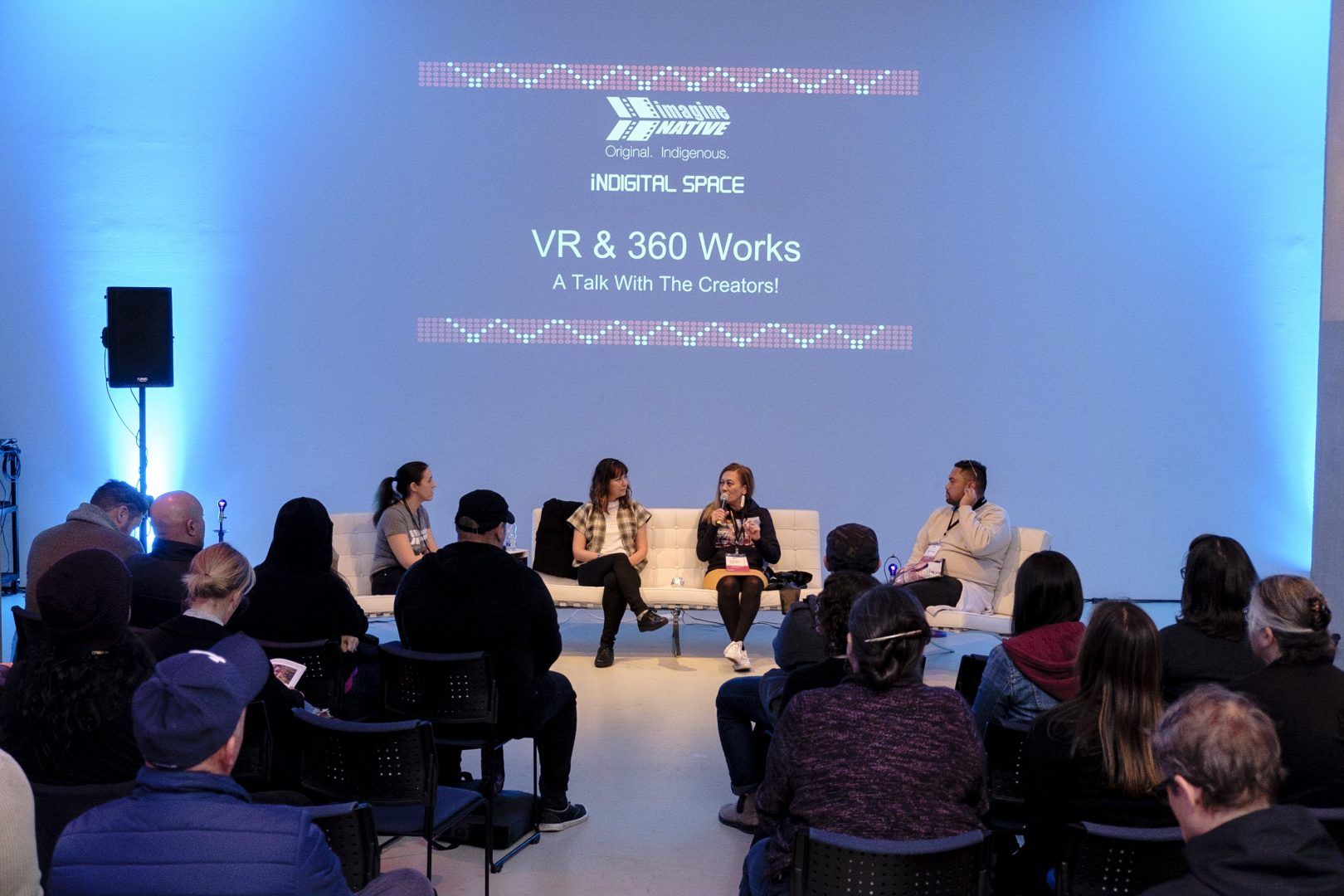 Q: How will this document change the way filmmakers engage with Indigenous content?
JR: For us it was never intended to be prescriptive. It was always meant to be reflective of what the filmmaking vision was and what community wanted to see and also hopefully to empower Indigenous communities, territorial organizations, and regional organizations to learn about the filmmaking industry as well. So that they could have the knowledge to ensure that they have proper credit and proper payment. That’s a component that I think still needs to be developed and hopefully will come from the launch of the protocol. The intention is for the protocols to live at the ISO (Indigenous Screen Office) and really take it from there—to really inform guidelines and how films are made. The reason is specifically to have a generational impact, to really change things going forward. It’s a living document, it’s not something that should be etched in stone. I think it should be understood as a continual process of engagement. I think it’s in good hands with the ISO because that organization will make sure that this document is reflective and responsive to industry, community, and socio-cultural needs as they change over time.

This interview has been edited for length and clarity.